We were suppposed to hike to a lunar landscape but torrential rain spoiled play. So we walked to a bodega instead where they plied us with fruity reds, crisp sweet whites and the darkest rosé I’ve sipped.

Thank you rain for spoiling our original plans. 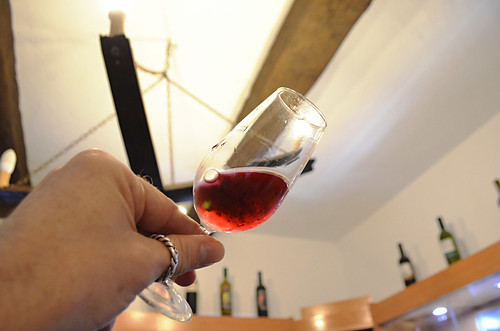 I know who they are within seconds of one of them speaking. In this case I also know exactly where they come from… or which coast at least.

Opposite coast and opposite in so very many other ways as well.

They’re not like the people I know and grew up with in the country of my birth. Those people were down to earth and lacking airs and graces whatever their social standing or occupation.

They’re successful and well to do. We know this because they tell us it is so.

They’re not like other tourists – they seek quality and culture. But they’ve been working hard you see, so this time they’ll relax by the pool.

It’s one of many signs that flashes like a neon light when you meet people who are not what they try to tell you they are. The neck of the bottle of wine sticking out of the ice bucket is another.

I bristle whenever someone tells me ‘I’ve been busy, so this time I’m doing nothing except relaxing.’

There’s almost an inference that people who like to fill at least some days of their well earned holiday still being active and exploring can’t have been quite as busy as those who ‘need to relax and do nothing’.

The statement tells me a lot about them.

They talk of luxury hotels and exotic destinations. Of fine food and wanting to only enjoy the best.

“Yes,” one replies confidently and authoritatively. “We know, we’re enjoying a nice bottle of the local stuff right now.”

My eyes flick to the neck of the bottle and back.

The neck of the bottle speaks volumes.

It’s not local. It’s a mass produced brand name from elsewhere that is, at best, ordinary.

They don’t know this because all that’s important to them is appearance not substance.

That’s false snobs for you.