Waiting to walk through the scanner at Manchester Airport, a security official asked me to take off my jacket and put it through the scanner. The ‘jacket’ was actually an ordinary shirt over a tee-shirt, which I pointed out in a friendly manner, expecting him to wave me through.

“Take it off,” he insisted.
“But it’s a shirt,” exasperation started to creep into my voice.
“Take it off and put it in the tray.”
“What?” exasperation turned to irritation. “You really want me to take off my shirt?”
“Yes.”
“Take off a shirt? Seriously?” I guess by this point my eyes had silently added “ya wee prick,” to the end of the sentence.
“Yes.”
I took off my shirt and stuck it into a tray.

I breezed through the scanner, even though I expected to be directed aside to be ‘swabbed’. Oh no, they had other plans for dealing with me.

I watched as the tray with the shirt headed along a different track to most of the other trays. It slid to a stop at the back of a line of other ‘suspicious’ trays. The crumpled olive shirt looking quite silly and seriously out of place among a long convoy of bulging flight bags.

“This is what happens when you can’t control your mouth,” A, who had waltzed though without incident, was annoyed with me. My shirt being singled out for further inspection meant we were going to have to hang around security for a bit longer, until it was my turn to… to do what exactly? Open up the shirt to show there was nothing suspicious in it?
A quietly fumed at me. Harshly I felt, I still believed questioning something as nonsensical as having to remove a shirt was reasonable. I hadn’t been offensive. My expression may have been of the ‘you can’t be serious’ variety, but I had generally reacted in a calm, if slightly exasperated, manner.

Eventually my turn rolled around, slowly. I expected the female official to simply hand the shirt to me, maybe with a an apologetic smile (she would surely see the ridiculousness of the shirt being in the ‘suspicious baggage’ line). I was going to smile back and remark “the colour must have really offended him.” Then we’d both laugh and all would be well. But she was in on whatever was going on, and they were apparently still punishing me for questioning having to take off the shirt.
“It didn’t scan properly, you’ll have to put it through again,” she didn’t even look at the shirt or my face.

A shirt didn’t scan properly? What bollocks. I knew it. They knew it.

However, this time I meekly replied“okay,” and did as I was instructed.

I was only too aware the next stage would probably end with me having a finger stuck up my anus.

The stranger walked into the small village, arms spread wide.

“I come to share a gift which will enrich your life,” she beamed.

“Is it books so we can better educate our children?” Asked one villager.

“No,” smiled the stranger.

“Then it must be medicine so we can heal our sick?” Another villager suggested.

“Aha,” a third villager exclaimed. “You have brought us tools so we can build better houses?”

“It’s none of those,” laughed the stranger as she revealed a sleek, rectangular object. “This is a smartphone. I’m going to show you all how to use Instagram.”

This, depressingly, is a true story, an example used at a travel conference to illustrate how some travel bloggers have supposedly impacted positively on the places they’ve visited.

2012 :– “Guidebooks are bad, they’re useless… out of date as soon as they’re published. Don’t bother with them. Travel blogs are immediate, dynamic, with real up to date information. Guidebooks are doomed. They’ll soon be obsolete.”

2014:- “I’m an innovator in the world of travel blogging, I’ve just published an ebook full of essential information on what to do, where to eat, where to stay called ‘How to Live Like a Local in Rangoon’.”

2016: – “Don’t bother writing top 10 lists or mini guides to destinations on your travel blog, the Bluff Guide does it so much better so there’s no point. By the way, did I mention I’m now a contributor to the Bluff Guide series of travel guidebooks – YAY for me.”

And at some dusty crossroads in the middle of nowhere a man whose face is obscured by shadow but whose gleaming white smile is dazzling puts another soul into a little muslin bag hanging from his belt.

Two savvy British travellers who both refused to eat in restaurants where there were British tourists turned up at an off the beaten track restaurant supposedly only known to locals in Novara, Italy at exactly the same time. One held the door open for the other who smiled and said “Thank you,” to which the door-holder replied “You’re welcome.”

Both, on hearing the other speak with an obvious English accent, stopped in their tracks and stared briefly at one another with barely concealed distaste before turning and storming out of the restaurant.

Sometimes labels only exist in the minds of those who like to apply them.

I was drugged. A potent pill caused by a combo of jet-lag and pre-dawn rising in order to see condors with 3m wingspans rising on the early morning air currents on an estancia (ranch) just outside of Coyhaique.

I was drugged and probably dribbling… till a huge bird languidly strolled across the tundra in front of us. When I say huge I mean ostrich-sized proportions.

It looked like a throwback to prehistoric times. With the wild Patagonian backdrop adding to the drama I could actually have been in a real Jurassic Park.

I knew we were hoping to see big condors in this part of Chile, but I’d no idea there were ancient looking birds like this.

Jet-lag and a lack of sleep were suddenly not a problem.

One sentence. The woman has uttered just one sentence of seven words and I now know everything I need to know about her.

She reads the Sun newspaper and believes everything in it, even when it admits to printing inaccurate information; she likes to watch soaps and reality shows on TV; her and her husband eat exactly the same thing on the same day every week (usually involving meat and two veg – none of that fancy foreign muck); she believes Syrian refugees are actually terrorists in disguise; she works in a factory located two streets away from her house; she thinks Jeremy Corbyn is a scruffy dangerous Communist and votes Tory although she thinks Nigel Farage is a thoroughly decent bloke, and she uses the line ‘I’m not racist but…’ on a regular basis.

How do I know this from a sentence of seven words?

Because the sentence was “normally I go all inclusive in Sharm.”

There’s a not very loud ‘beep’ followed almost immediately by a question “Taxi?”

Within a couple of hours I’ve come to know this as the soundtrack of the streets in Santa Maria on Sal, one of the Cape Verde Islands off the coast of Africa.

I say streets, but the main tourist town seems little more than a colourful and quasi-colonial main avenue with a few dusty side streets.

This is tourist hell according to some Cape Verdeans.

I think as ‘over developed’ tourist towns go it’s actually quite palatable. I like its easy manner and relaxed, smiley residents.

“Hey,” one shouts. “You promised to come see my market stall.”

I haven’t set eyes on him before.

“Maybe next time,” I wave dismissively.

He laughs. It’s no hassle. No problem.

No stress, like it says on the t-shirts around the town.

The walk to the end of the road involves stepping over a few dogs sleeping in the middle of the cobbled street and shaking my head a couple of times at ‘beep’… “Taxi?”

A beach bar on the sand beckons. Actually a cold beer in a beach bar on pristine golden sand lapped by what could be ‘touched up’ brochure waters beckons.

I want to take a photo of the perfect tropical scene. Between me and the sea is a snoozing sunbather. I can’t tell if it’s an overweight man or an overweight, topless woman with small breasts.

Whatever he/she is, it spoils the scene.

The waiter brings my beer. The air is warm, the beer is icy. Perfect. 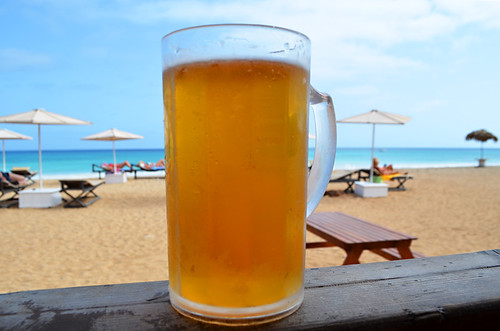 I’ve a few hours to spend before it’s time to jump on a plane and hop to another island where tourism comes way down the line from real life.

This is the buffer zone.

The Pressure Valve
Blog at WordPress.com.