We spent the night in another part of the island, sitting on a hillside watching a fiery sunset from above the clouds. 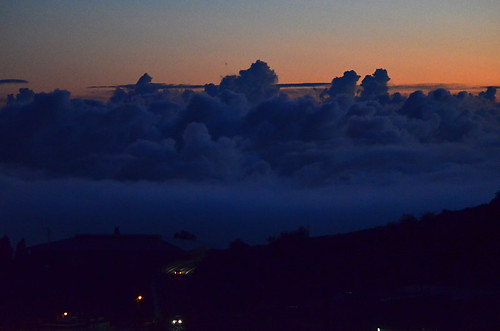 Above us the sky dazzled with constellations.

This morning someone had painted it a dull grey.

Drizzle and low mist accompanied us on the drive home through the mountains. We sprinted through watery bullets to the sanctuary of the house… and discovered the electricity was off, the main switch tripped. Heavy rain was the culprit. Whilst we enjoyed ourselves above the clouds, their contents had been making mischief.

I flicked the switch and it jumped back to its mutinous non-working position.

I tried again and it immediately flicked off again.

This was a problem.

The electricity company had recently installed a new meter on the road about 100 metres away. Don’t ask me why our electricity meter should be there, it just is. ‘Improvements’ here can often result in the opposite, so the first thing I did was to check it hadn’t malfunctioned. It hadn’t.

A red light bleeped a clear message. ‘It’s not my fault.’

The second suspect was a socket under the avocado tree in the garden. It’s been a problem in the past. If not positioned properly, rainwater seeps in and trips the electricity.

On my way to the suspect tree I met my neighbours talking to an unfamiliar man who seemed to know a lot about electricity (I don’t). He advised me to carry out an elimination process, switching certain areas on and off and trying the main switch to identify where the problem was. It seemed a sound and simple idea.

A couple of clicks later and the avocado tree was found guilty as suspected.

The electricity is back on, and so is the rain.

In the garden, a plug socket underneath an avocado tree sits encased in a plastic bag under the protection of the bottom part of an eight litre plastic water bottle.

This primitive contraption will determine whether we will have light tonight.