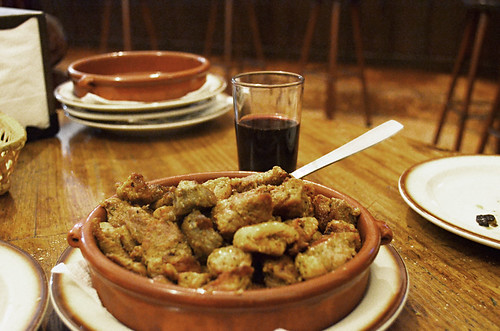 She was as slim as a rake, probably due to being a force of energy that couldn’t stand still for even the blink of an eye.

One second she was pouring a glass of wine for a hooded young man you’d probably be nervous about meeting in a gloomy underpass, the next she was whizzing into the back room to make things sizzle – our spiced pork – before emerging, all smiles, to tease a clearly besotted middle aged man in a theatrical bow tie.

The waitress was a one woman band; tending bar, cooking tapas and snatching moments to share a few words with each of her eclectic band of patrons.

When we asked for wine she left us two traditional tumblers and a bottle of dusky red. So we drank the lot as we worked our way through the garlic mayonnaise, spiced pork, garlic mushrooms and savoury goat’s cheese the good barmaid had rustled up.

It was a basic, but not unattractive, local bar and all the more comfortably cosy for it. These people are strange though. They live in a climate that is warm during the day all year, yet at night their bars are open to the elements. You’d think they’d be the ones to feel the nip in the night air, yet it was us two Northern Europeans who zipped up our jackets as we perched on odd wooden chairs that looked as though they belonged in a house inhabited by three bears.

When it was time to leave we asked for the bill, a ridiculously cheap €15. The barmaid asked where we were staying. When we told her it was the Era she smiled:

“Ah, I know Andrés very well,” she looked beyond us and out of the door where heavy raindrops splatted against what had been a dry and dusty road. “It’s raining, I will drive you back.”

The Era was only a kilometre away, we were wearing waterproof jackets, the bar was full of thirsty people and she was on her own, juggling everyone’s requests.

We insisted there was no need, she had a bar to look after and we didn’t mind a little rain.

She insisted more assertively that it wasn’t a problem and she wasn’t taking no for an answer.

There was no point arguing.

The barmaid left her customers to look after themselves and shepherded us back through deepening puddles to our temporary home where the sudden heavy rainfall had shorted the electrics. But that’s another candlelit tale. This one was about the good barmaid.

Except she wasn’t a good barmaid, she was a wonderful barmaid.