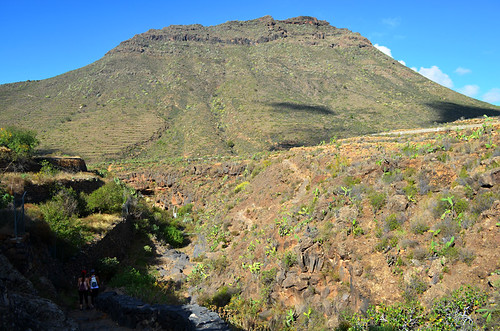 In three kilometres they haven’t paused to catch breath.  Words gush out, creating sentences that never, ever end.

I should be writing things like ‘tranquil terraces’ ‘silent apart from the kestrel’s shriek’ etc. etc. etc.

The truth is there is no silence. There would be if the girls weren’t sharing the same path. But they are and so is their incessant chatter.

We started the route at the same time and our paths have criss-crossed a few times. They’re much younger and faster. But every time they get to the point where the loud chatter becomes almost a whisper, they stop. Hair is put back in place, something is applied to the face, a bra strap is adjusted.

They stop. I catch up and pass them… and the whole circle begins again and I mutter under my breath about the fact they won’t shut up and let me enjoy the peace of the countryside.

I descend to the floor of a narrow ravine as they begin the climb out the other side. Sound is amplified. The cling-clang from the bells around the necks of a handful of goats pulling at wild herbs take on the intensity of the pealing inside a church tower.

The girls are louder.

The echoing canyon prompts them to make howling noises. Nature winces. Even the goats pause their feeding to glare at these noisy creatures with no respect for tranquillity.

I pass them again and start a climb that is taxing enough to bring the sweat sprinting down my face. After a couple of hundred metres I stop to rest on a rock. The girls catch up.

“Un poquito descanso,” I say as they skip past.

One pulls her tee shirt away from her body and gasps. “Si, hace mucho calor.”

The have open, friendly faces with eyes as big as their smiles.

I reach the summit, a wide plateau with views across an arid land pockmarked by volcanic cones.

The girls disappear into the shade of a rare tree, still talking.

I sit on a flat rock nearby. Their chatter no longer annoys. In a way it has become a comforting drone. Part of the scene.

After thirty minutes the girls emerge. They’re no longer talking. Now they’re singing… and dancing. They sing jauntily as they pass. I laugh. So do they, without missing a beat.

The sun is engulfed by a bruised, heavy cloud. Rain is coming. Time to leave.

The girls are a few yards ahead on the path. They’ve returned to talking in paragraph-less sentences.

The scenery is stunning with or without a soundtrack and the girls’ happiness is infectious.

I’m pleased I’m sharing the path with them.