The conversation came to a complete halt.

Our friend stared at us, waiting for an answer.

There’s a very simple test to check whether you’re a fussy eater or not. When you pick up a menu do you peruse its contents considering everything on it because you’ll eat absolutely anything? Or do you skip lots of menu items, seeking out the handful of dishes that are the only things you’ll consider eating?

If it’s the latter, then you’re a fussy eater. It’s simple.

But not one of our friends who are fussy eaters recognise it.

When we are trying to decide where to eat they all say the same thing every time: “You choose, we’re easy, we’ll eat anything.”

Mature friend A will eat anything as long as it’s scampi, tuna steak (we introduced them to that one) or chicken in mushroom sauce. That’s it, that’s the lot.

Friend B will eat anything as long as it’s steak, or beef of some sort at a push. Friend B sometimes brings their own mustard when they go out to eat.

Friend C will eat anything as long as it’s a particular type of fish cooked and served a specific way.

We were with friend C who had asked us what we thought about a restaurant known for its creative cuisine. He was looking for new places to try after being disappointed by a place he’d dined at earlier in the week.

It was a restaurant we’ve always viewed as a bit stuffy and old fashioned so we’ve never been tempted through its doors. Our friend had asked for the same thing he asks for just about every time we’ve dined out with him. The restaurant didn’t have the dish he wanted done the way he likes it, ergo it wasn’t a good restaurant.

Seconds prior to telling us this friend C had interrogated the waitress about the dishes on the menu of the restaurant we were dining in – how they were cooked, what the ingredients were etc. complicating what should have been a simple process i.e. choosing something from a menu which was full of delicious sounding goodies.

Friend C is under the impression chefs should prepare what he wants to his specifications rather than something that is actually on the menu which is why when he asked about the restaurant with its avant-garde cuisine both of us blurted out at the same time.

The question came again, this time accompanied by eyes that had visibly narrowed slightly.

The obvious and honest answer was ‘because you’re a fussy eater and there’s no way on this earth you’ll like the adventurous food they serve.’

The answer we actually gave was a mumbled mess of an explanation about how chefs in restaurants like that tend to prefer to present customers with their signature dishes without any input from the actual diner.

“But they must have a menu?”

It was getting awkward. We were being herded against the wall where the only exit was a neon signposted screaming ‘BECAUSE YOU’RE TOO FUSSY’.

We were saved by the waitress who appeared at our table to check if we were ready to order, distracting our friend from his line of enquiry. He turned his attention to the waitress, having discarded everything on the menu.

“Do you have bream cut open like a butterfly which is then grilled and served with a white wine, parsley and lemon sauce?”

Did I mention we were in a vegetarian restaurant?

I’m in the hunger lanes and desperate to sink my teeth into a chunk of crispy cherne.

There’s a slight problem. More accurately, there are two problems.

There are plenty of restaurants and we scan menu after menu. Not one of them contains even one meat dish. The restaurants are busy and I look on enviously like a starving pauper as diners enthusiastically try to reduce the world’s marine population.

Two women emerge from one that is clearly very popular.

“Y barato,” the other adds, laughing.

Cheap and good the restaurant might be but we won’t be eating there unless they ‘do’ meat. A waiter at the entrance looks at us expectantly. There are no meat dishes on the menu but you never know.

“Do you have any meat dishes?” We ask. Two of us – the eaters of fish and seafood – shuffle our feet and look at the ground, too embarrassed to meet the waiter’s wide-eyed expression.

“This is a fish restaurant…” he states the obvious. “… in a fishing village.”

We’ve been blighted by our friend’s fussiness. Tainted by his restrictions. The waiter will no doubt tell his compadres later of the four foreigners seeking steak in a village that specialises in fish.

The next place has one meat dish; chicken. It makes it a possibility.

Finally, up a quiet side street we strike beefy gold. A restaurant with a steak menu. In this one place the fish selection is limited.

We order a fish and seafood mixed grill.

My friend’s steak is good, our seafood is only okay.

This village has a reputation for great seafood restaurants. We’re not in one of them.

I hate eating out with fussy eaters. 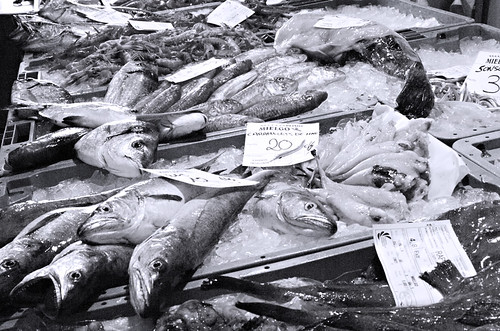