I don’t know how I feel about the woman with the pipe. I’m not sure if I prostituted myself or not; paying to satisfy an urge. But then don’t many transactions boil down to simply paying for something you want? 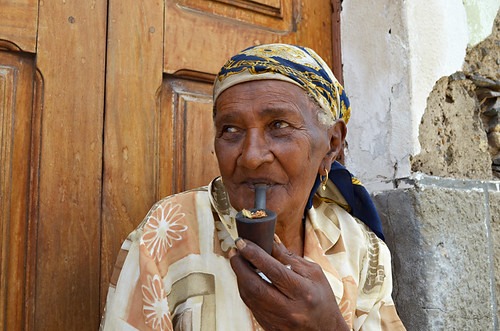 This is the ethical dilemma I mulled over. I wanted the classic Mindelo shot of an old woman smoking a pipe and she wanted a couple of coins. No harm done, except to fuel a potential notion that all you have to do to get money out of tourists is to sit and smoke a pipe.

It doesn’t encourage ‘real’ work. On the other hand, she’s an old dame. I’m hardly encouraging a life away from tending crops in the fields.

I tell myself it’s no different from throwing a couple of coins in a busker’s hat. She’s street theatre.

But there’s still a niggle of doubt.

I have discovered the spot where I shall create a literary masterpiece. 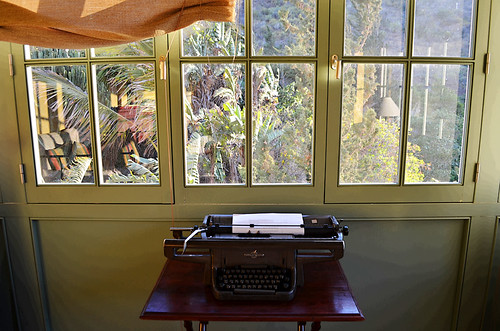 Two islands, both arid and brown just like everyone told us they would be.

The third, Santo Antao, looked like more of the same until we passed a small forest with a confused personality; pine, jacaranda, mimosa, cypress. Trees you wouldn’t normally find sharing the same hillside.

More greenery crept in in the form of tended fields in a large caldera. It was a typical farming landscape in every way, except for the fact it was in a volcanic crater; a hidden valley surrounded by sharp, ragged walls.

Our path climbed to a saddle, a spot which wasn’t so intimidating to get to as most parts of the wall.

And then it all changed. 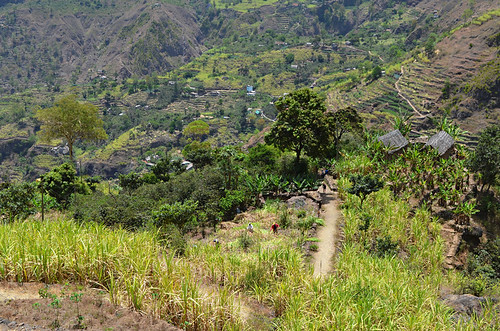 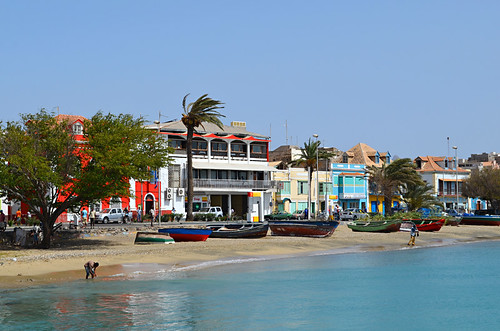 A scowling man exhibits all the traits of an expat. He knows the bar staff, he orders his drinks confidently; a man who knows the local ropes. His gaunt face is deeply tanned, the shade of someone who has spent a lot of time under the African sun but who isn’t African.

I only notice him because a man in ragged clothes walks over to his table and mimes he’s hungry.

I notice him because instead of just saying no and turning away, he stands up and puts his angry face right into the beggar’s before mimicking the beggar by pointing his fingers to his own mouth and then laughing. It’s disrespectful.

The beggar puts out a hand. The ugly expat swats it away as if it were an annoying fly.

Maybe the beggar should have walked away. But the expat is treating him like he’s excrement on his shoe.

His actions have all the hallmarks of someone who thinks the beggar is a lesser being. This was a colonial town. The thought enters my head that there might be at least one person who thinks it still is.

I want to go across and ask the expat why he thinks it’s okay to behave in this manner to another human being. Truth is I want to punch him right in his smug face.

I do a very British thing instead; I glare furiously.