The walk ends in the old town where it started. It wasn’t a long walk, about 10 kilometres, but it was sweaty going, straight up the hillside on a rocky old trading route that ran parallel to a solidified lava flow which had engulfed the town three centuries earlier. Then, after skirting the ridge for a brief section,  it was back down again by a different path, another trading route, which snaked its way along the  green slopes to return us to the town.

The aroma which greets us as it dances through the old streets identifies exactly what our reward will be; seafood. Lapas to be exact, washed down with an icy beer.

I don’t eat nearly enough of these grilled limpets drizzled with a mix of olive oil, garlic, cilantro and white wine. And to think on the island I grew up on we used these as fishing bait. What a waste. 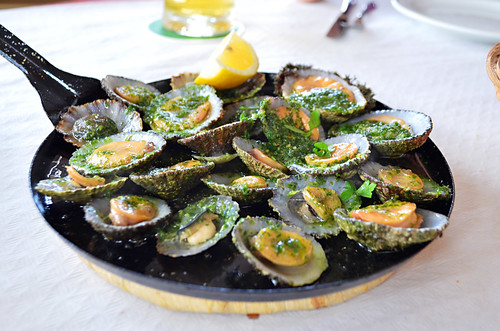