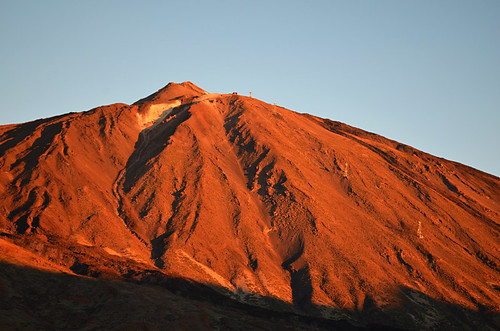 It’s freezing. The sun is slowly clearing the crater wall, turning the volcano an intense deep orange. The slopes look like they’re on fire, which they once were… a long time ago. This intensity won’t last long, but the volcano won’t lose it’s power to impress. In a short time the sun will fill the crater with warmth, even though the air temperature will only be around 2C. Less than forty kilometres away it will be 20C.

Such an incredible place.

The first rule is to try not to write anything that is actually of any use to anyone else.

The second rule is that even though you’ve only ever eaten in two restaurants on Tenerife you must state with unshakeable authority that what you are eating (usually steak) is the best on the island.

The third rule of Tripadvisor restaurant reviews for Tenerife is it doesn’t matter if a restaurant specialises in tapas, Mexican, Italian, Canarian, Spanish or seafood, at least half the reviews will be about how good or bad the steaks are.

The fourth rule is a restaurant will be classed as being excellent if a mountain of food is piled on the plate, even if said food is barely edible.

The fifth rule follows on from the fourth; the cheaper the mountain of food on the plate is, the better the restaurant is.

The sixth rule is when you write ‘a local told me of this hidden gem’, don’t mention the ‘local’ was actually a Cockney expat in a Brit bar.

The seventh rule of Tenerife restaurant reviews is to try to avoid saying what you’ve eaten… unless it was steak.

The eighth rule is when you say a restaurant was clearly good as all the ‘locals’ ate there, you mean it was full of British expats.

The ninth rule is to always complain that your bacalao encebollado wasn’t made with fresh fish. You can mention what you’ve eaten in this case as it’s a complaint.

And the tenth rule of Tenerife restaurant reviews is to seriously criticise any restaurant that serves a steak which is the slightest bit pink in the middle as they obviously don’t know how to do steaks properly.