The rains came. They fell with such force that there must have been a bit of frantic pairing off in the animal world. Ravines were filled to the brim with raging torrents that swept away everything in their wake. Streets became rivers and cars turned into reluctant boats.

But not where we live in the north. Thankfully here it was just a rainy day.

The worst affected places were in the north east and the south west of the island, where monsoon deluge caused devastation. Both north and south escaped rather lightly.

In the Spanish speaking world it was quite clear what happened and where.

There, rain is seen as a virus.

The first rule of expat shite club is that when it comes to weather, it is always worse in the north.

The worst example of this was one person who actually conceded that a town in the south west was badly affected, except he then placed it geographically as being in… the north.

The weather is always worse in the north even when it isn’t.

Today there is another weather alert for rain. The official Met Office advice is that it will fall throughout the day in the north, 60mm over 12 hours.
In the south, east and west it will be 15mm an hour between 1pm and 11pm with the heaviest rainfall forecast for the south east.

Spanish websites reflect this. But once again English reports have interpreted it differently.

As always, despite the Met Office advice and the maths regarding predicted rainfall figures, the word on the English speaking web is ‘the heaviest rain will be in the north’.

Of course it will.

I used to wonder why so many English speaking people on this island got their information so wrong.

The answer is simple.

The most accurate sources are in Spanish. A seriously high percentage of English speaking expat residents can’t speak or read Spanish. Subsequently they get their information from a limited number of sources – never from the original source in Spanish. It is second, third or a lot of hands down the line. If the first source gets it wrong everyone gets it wrong.

And anyway, the weather is always worse in the north.

Tomorrow we are expecting the first rains of winter.

You know those movies where the main character suddenly finds that people he/she has known all of their lives suddenly deny ever having set eyes on them before? Well rain and the southern parts of this island can be a bit like that.

“Rain, nope not here. It never rains here. Hasn’t rained here for nigh on a millennium.”
“Really, I was here two weeks ago and it rained.”
“No, that didn’t happen,” their eyes turn cold and they shuffle away muttering, hitting a reboot button located just above the hairline behind their left ear. “It definitely didn’t rain here.”

I read a blog recently where a visiting travel blogger had been caught out wearing just a sun dress when visiting an area where it did rain because ‘locals’ had told her confidently ‘it never rains’.

When visitors say ‘locals’ they don’t really mean real locals, they mean English speaking incomers like me. And plenty of incomers are proficient in one thing, talking baloney. Some should consider taking up jobs as writers of fiction as they can sure spin a damn good tale.

A few years ago I was caught in a monsoon in the place where the travel blogger had been staying; one of those places where it never rains, round about the same time of year. But that will have been erased from memories a long time ago.

Maybe it’s a condition like the one Guy Pearce had in Memento. Minutes after it rains they forget it ever happened.

For years I’ve been bemused by the ‘haven’t seen rain in months’ comments when I know that rain has actually fallen – thankfully some people who haven’t been affected by the Memento disease use Twitter and facebook.

One of them was responsible for unlocking the mystery to this strange condition.

“But it has already rained here,” A woman responded to the ‘first rains of winter’ announcement.
“That wasn’t rain,” came the reply. “That was only a few drops.”

And there was the answer to the mystery.

Whilst one tear drop of water hitting the ground amounts to rain in northern parts, the same doesn’t apply to southern ones.

There are many words that can be applied to describe the wet stuff falling from the sky in the south of my island, but may the gods bring fire and brimstone down on your house if rain is one of them.

It will rain tomorrow. It will be decent rain. A storm out in the Atlantic more or less guarantees that.

And in a couple of weeks time there will be an announcement.

‘Tomorrow we are expecting the first rains of winter.’

We’re late. It’s dark. We’re in a strange city (it might not actually be strange, but you know what I mean). We don’t really know where we’re going. I did know. I’d marked it on the map. Did I mention it was dark? We can’t see the map well enough to read it.

The iPhone torch helps but there’s another problem. The street name on the plaque above our heads doesn’t actually match the one on the map. This doesn’t help.

My plan had been a good one. We take the metro to the end of the line, as close to the restaurant as we can get, then walk the rest of the way. My guess was about twenty minutes hoofing it.

After dark everything is different.

How do we know which direction to go? Well, there’s this huge Basilica in the street next to the restaurant. We could see it from the other side of the city earlier. It’s a friendly, guiding landmark.

Except in the blackness of the night it has gone missing.

I check the map, check the street names. Look up, look down, look all around… and make a guess, hoping my instinctive navigational skills are tuned in.

We walk for ten minutes along a busy avenue. I can hear a mental clock ticking down.

Finally I see the faintest golden glow flickering behind a teasing curtain of trees. It’s a familiar glow even though I’ve never been here before. It’s the sort of glow that often bathes big churches. It is the Basilica.

It reveals more and more of itself with every step… until we hit a barrier.

In daylight hours this barrier would be called a delightfully charming park I’m sure. But after-dark parks in strange cities are to be treated with caution. Especially ones with dim to non-existent lighting.

It’s a decent-sized park. Walk all around it and we will be late. Walk directly through it and we have a chance.

We go for the most direct route.

As we reach the park’s shady centre, we hear music and can just about make out the shape of an old fashioned bandstand.

There are people on it, couples, and they’re moving in neat, rhythmic circles.

Dancing in the dark.

We stop and watch, letting our eyes adjust to the dimness. There’s something wonderfully surreal about the scene. Although there is also something quite ghostly about it, there’s no need to feel any apprehension about a park where people feel comfortable enough to meet up to dance in the shadows.

We continue on our way and emerge into the light outside the Basilica and at the bottom of the street where the restaurant is located. I check the time. We’ve still got ten minutes.

Our timing will be perfect.

We’re early. There’s nobody else in the tiny restaurant/fado house.

It’s an ideal opportunity to take photos without intruding on other people – the tables with their eclectic mix of couverts, paintings on the wall showing when the house used to belong to a fado-singing prostitute (a bare breasted woman singing along to a man strumming a Portuguese guitar), the toilets (that one is prompted by the waitress who insists I take a photo of them).

It also gives me the chance to have my camera settings perfect for when the fado musicians take to their seats.

I ask A to sit at one of the two chairs set up for the guitar players against one wall and snap off a couple of shots till I’m happy that all is good to go.

We work our way through pungent cheese, black olives, salt cod and chickpeas, octopus and garlic chicken before the three fado musicians, two guitar players and a singer, take up their positions.

And then the lights go out.

It is pitch black, or nearly. All the tables have a small candle which add atmosphere but no real light. The musicians are shrouded in darkness. I can’t even see well enough to focus; I’m chasing shadows. But I click away anyway, unsure whether I’m capturing anything half decent. After a few moments I realise it doesn’t matter, this isn’t what the fado house is about.

I put down the camera and sit quietly, enchanted by haunting songs that send a shiver rippling down my spine. 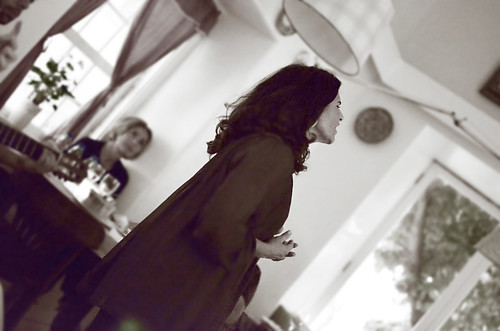