A sixth sense told me there was something fishy going on.

The female customer at the bar disappeared into the kitchen to emerge a few moments later holding a napkin around what looked like a doughnut. By the way she gingerly picked at it with her teeth I could tell it was hot… fresh from the frying pan.

I knew that my calamari romana was being deep fried at that very moment. There was nobody else in the dining area and she had emerged from the kitchen with a hot, battered ring of something.

It all added up. That was part of my order she was munching on. She’d stolen my calamari. Or, as the presence of the napkin suggested, had been given one of my squid rings by an accomplice behind the scenes.

Except the golden ring seemed far too big to be calamari.

But, sure enough, a few moments later the waitress emerged from the kitchen carrying a plate with huge calamari rings. The bar snacker WAS munching on my squid. 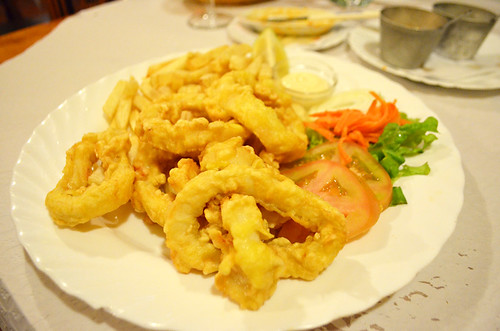 I was outraged at the culinary crime.

I pondered how I was going to deal with this audacious act as I tucked into the tender, tasty rings. They were good, in fact they were great – which made me resent the theft even more.

By about the fourth ring my outrage started to abate. I was filling up.

A combination of a mountain of pungent cheese pate, spicy mojos and bread plus the oversized rings had me struggling to clear my plate.

Another big calamari ring would have been too much.

The calamari thief had done me a favour.

I do not believe for one second that was her intention.

They lie on their backs on the warm tiles, a male and a female.

I hope they are resting, in shock, and will spring back to their feet to fly away in a few minutes.

I know they won’t.

The female’s spindly legs twitch and jerk; her eyes are shut.

The male’s yellow beak opens and closes as he gasps for breath.

It’s my fault. At least I feel responsible.

At this time in the morning the sun turns the windows on the bedroom doors into a mirror, reflecting the explosion of vibrant bougainvillea on the hedge that climbs along the side wall.

This morning I only opened one door. If I’d opened both there would have been no reflection.

The female’s legs stop twitching and her head lolls to the side, she’s gone.

If there had been no reflection the pair of blackbirds wouldn’t have flown into the glass.

The ebony bird’s beak is still and his eyes slowly close. Within seconds he has followed his mate.

At least they died together.

This is an area of outstanding beauty… so we’ve been told.

We’re supposed to pick up a couple of bicycles, go exploring and take some marketing photographs.

It’s 1pm, a guy in a wooden ark just sailed past us.

The cycling gig is simply not going to happen. 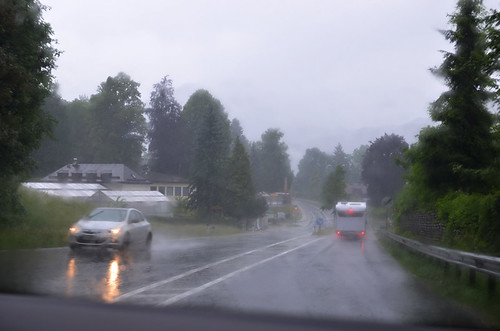 My friends enjoy being silly.

But they’re not fools.

I have no time for fools.

I’m Scottish. I have a kilt. But I don’t wear it for everyday use.

In Austria they really do wear dirndls and lederhosen, casually – like the way I’d just throw on a tee-shirt and jeans. Well, maybe not jeans. For some reason they make my legs look ridiculously short. But you get what I’m saying.

There are people in lederhosen and dirndls everywhere. The dirndl can be quite alluring (I can’t see one without thinking of jugs of foaming beer so it has a positive connection), but I just can’t see the attraction of a man wearing shorts with braces, even if they are suede or leather. And this is from someone who’ll happily wear a ‘skirt’ without thinking twice about it. 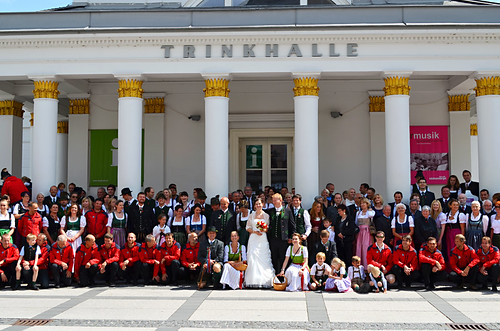 I was lucky enough to see a whole army of dirndl and lederhosen wearing locals, presumably in their posh versions for a wedding. But I’m kicking myself that I was too slow getting the camera out and so missed the best lederhosen photo opportunity I’m ever likely to get.

A lederhosen-wearing teen shot past me on a skateboard.

Sometimes it takes another person to tell you it’s time to let go, to say goodbye.

For days it had been hanging on. Just when I thought it was finished, it gasped back to life once more. I felt it still had a few more days left in it.

When I went into the bathroom this morning, my tired looking trusty can of shaving gel had been moved from its position beside my razor on the sink. It was sitting, alone, on the tiled bench. A shiny new model was already sidling up to the razor. 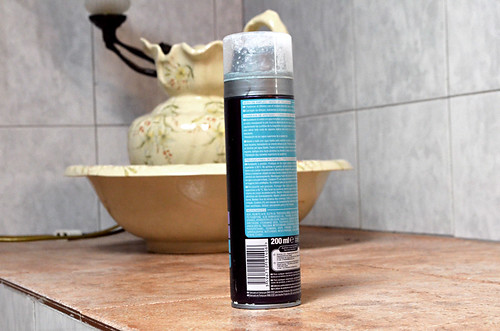 The message was loud and clear – I’m tired of seeing this empty can, dump it.

I stared at the gel, torn. It was good for a another couple of shaves at least. If I turned it upside down, gave it a few shakes and pumped its head furiously it would reward me with a thin, weak drizzle of gel.

But I already had a new can, full of life and thick foam.

For someone who spent their first decade in a house where the toilet was outside and bathing involved a getting into a tin bath in front of the fire, dumping things before they were really, really done still doesn’t come easily.

That was another century.

Reluctantly I picked up the can and dropped it into the bin.

A will be happy I took the hint.

But I feel wasteful.

We must have committed some sort of cultural faux pas.

Otherwise why was she so annoyed with us?

She couldn’t have been annoyed with us because the ten kilometre walk she’d told us about turned out to be a little bit longer than she’d advised – eight kilometres longer to be precise.

And she definitely couldn’t have been annoyed with us because the bus that was going to transport us back to the hotel didn’t actually run on a Saturday, leaving us high and dry… eighteen kilometres away.

No, neither of these ‘inconveniences’ to us could possibly be the reason the smile was replaced with a set line of a mouth and an icy stare that could freeze mercury.

Maybe in this place you’re not supposed to point out helpfully – you know, so that future guests aren’t caught out – that someone may have their information ever so slightly wrong.

I thought we were remarkably good natured about the whole thing, trying to play down the fact that we’d arrived at our destination too late for lunch and then wasted a couple of hours sitting in a deserted bus/train station before we managed to catch a train that got us at least within a couple of kilometres of our hotel.

But apparently we’d committed a mysterious faux pas. Not only that, we we’re clearly lying. She typed furiously at her keyboard to prove that buses did indeed run on a Saturday, after shrugging off the bit of info about the additional eight kilometres with a ‘so?’.

When three searches of the bus company’s website online timetable failed to provide the information she wanted there was another shrug and an exasperated exclamation that the website must be wrong. Then came the reason why she knew there was a bus even though staff in the station had told us otherwise.

“I used to catch it to get to school.”

It’s difficult to not come across as sounding bitchy at this point, but that was obviously a long, long time ago. It might have been a sleepy valley but I’m willing to bet some things change even there… things like bus schedules.

We backed off, calmly repeating the mantra ‘it doesn’t matter, no harm done’, leaving her staring hatefully at her PC as though it had stabbed her through the heart.

Whether it was a cultural faux pas or something else I guess we’ll never know… especially as she never spoke another word to us throughout the rest of our stay.

The Pressure Valve
Create a free website or blog at WordPress.com.