My last day in Italy was spent sleeping feverishly in an underground car park in Switzerland.

Figure that one out.

It hasn’t been diagnosed but I’ve heard enough descriptions over the years to recognise why I’m having to seek a ‘toilette’ on an uncomfortably regular basis without satisfactory results.

The location, the Cannero Riviera, is one of those ‘Italy as seen in the pages of Condé Nast’ destinations and the hotel room is fit for a king… of a very small country at least. And I can’t really enjoy either. 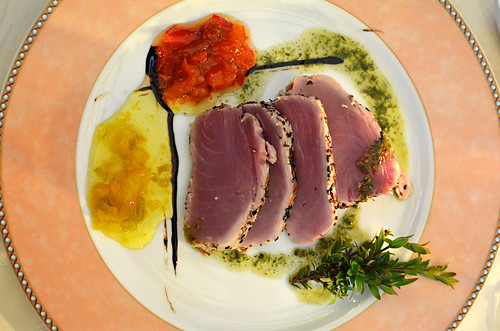 I’m pretty sure it was as a result of walking all day a few days previously without drinking nearly enough water. Whatever the cause I am now not functioning at a 100%, more like 50%.

I could kick myself for the rookie error and allowing my Scottishness to get in the road.

Sure, it wasn’t our fault that it was a Sunday and in this part of Italy, everywhere that would normally sell water is closed.

It’s definitely not our fault that the restaurant that we knew existed halfway along our walking route actually closed during lunch. It’s crazy. What sort of restaurant closes at lunchtime? Presumably they also closed at dinner times as well, only opening when people didn’t actually want to eat.

But what I do regret is saying ‘I don’t think so, there will be plenty of other places to get water’ on being told at a lakeside bar, the only open place around for miles, that a small bottle of water was €3.

We had an ice cream and a couple of beers in a café called Alice in Wonderland then headed into the hills… where things got weird.

The rural hotel was empty save for a woman in a flouncy cocktail dress (which seemed out of place considering we were in the middle of the countryside). She couldn’t speak much English and it sounded as though she’d muttered something about ‘wild animals’ as she showed us to our room.

It was mid afternoon, hot and we were sleepy after beers in the sunshine, so we wallowed in the tranquillity and enjoyed a siesta for a couple of hours.

When we woke up we were down the rabbit hole. 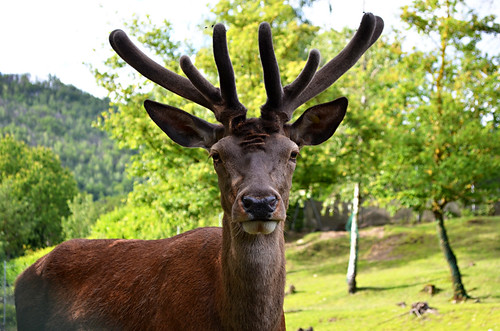 The empty, serene rural hotel had become the jam-packed rural hotel. From somewhere, a convoy of cars and camper vans had moved in. Children ran around the grounds whilst a couple of men sat cross-legged on the grassy lawn, strumming at guitars.

Beyond them were more people; many more people – looking as if they were dressed for a party. The women were clad in evening dresses, the men in sharp suits.

Bleary-eyed, we wandered into their midst; ironically, in our hiking gear, feeling like we were the ones that were dressed inappropriately.

Our bemused wandering through the grounds (the scenic route to the dining room) revealed what the wild animals were – two lynxes, a stag and a field full of bunnies in cages. Who knows why they were there?

We made our way through the ‘poshed up’ guests and into the rustic main building, where dinner had been arranged, to find ourselves in the middle of a christening.

It started happy-go-lucky enough. But as the night progressed and more drinks were downed it became clear that some members within the two sides of the family present didn’t seem to exactly hit it off with each other.

At one point there was a dispute over the ‘ownership’ of some balloons that ended with a puffing out of chests and an angry popping of said balloons. This resulted in a lot of disappointed children, which in turn lead to a soundtrack of Italian rugrat wailing as the balloon popper stormed off into the dark night. 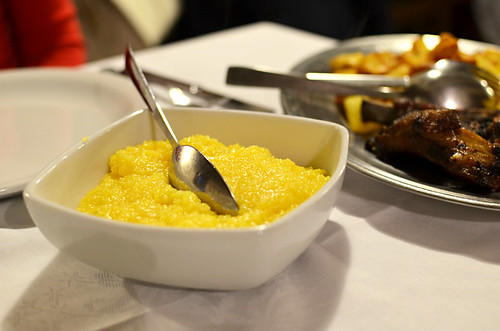 It might have been a script straight out of many big family celebrations, but the remote countryside setting added a quite surreal element. It’s just not what you expect in a quiet, rural location… as you tuck into your polenta and grilled meats.

We ate our food, drank some wine (a lot as it helped with acclimatising to the scenes around us) and retired to our room to leave the revellers to their balloon popping.

When we woke the next morning, tranquillity had returned. No girls in cocktail dresses, no men in shiny suits.

We’d emerged from the rabbit hole.

It stands stock still, not a movement nor a flutter of its delicate white feathers.

I step closer. Nothing. It is made from alabaster. A clever whimsical sculpture amidst the leafy terraces of an immaculate Italian garden.

I start to turn away… and it blinks.

Then, just to convince me it really is flesh, blood and feathers, it slowly unravels a treasure. In seconds a huge, intricate white fan frames the snow peacock’s proud face. 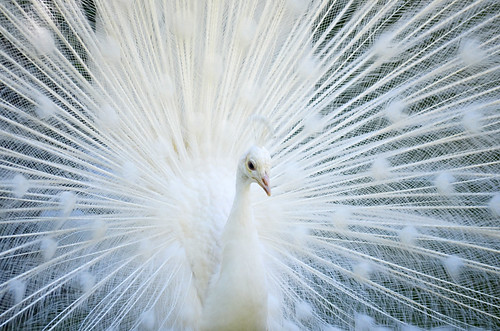 I’m not sure I have ever seen a creature so spell-bindingly beautiful. It could have stepped straight from the pages of a fairy tale.

Now I’m the one standing still; as if petrified by an Ice Queen’s magic.

The tiny, leafy terrace looks out over the lake. Across from us is another small island, Isola Madre. The world has yet to fully wake up. Everything feels morning fresh.

We are alone on the sunny breakfast patio of a small hotel on a 400 metre long island populated by fishermen.

Diego, the hotel’s supremely knowledgeable jack of all trades, has laid out a breakfast to match the beauty of the surroundings. 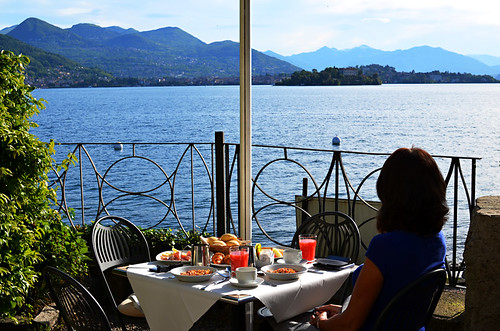 And it feels like we have it all to ourselves.

This is what sighs were created for.

The food is excellent. My sun-dried lake sardines, basking below three mini polenta towers, look and taste wonderful. I want to photograph them.

No matter what I do with the white balance, the result is the same. In-your-face neon orange.

It’s not only my sardines. Everything is DayGlo.

The people in pole position at the tables beside the floor-to-ceiling windows overlooking the lake are as orange as my sardines.

It is quite the most bizarre restaurant lighting I’ve ever witnessed.

A series of spots along the ceiling are the culprits, casting their disco glow across the whole scene.

Is it meant to be warming? Romantic? Calming?

Who knows? In truth I feel pretty calm even though all my photos are orange.

Beyond the windows lies a land that is totally blue. 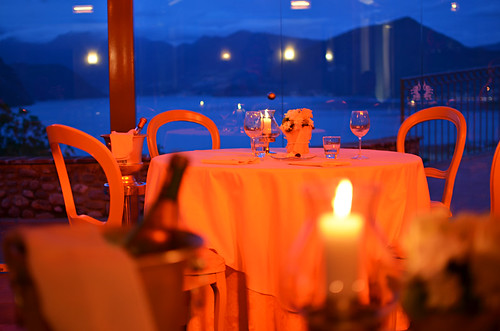 Although it’s potentially disturbing that the world has been reduced to two-tone, it’s still rather comforting to be able to see another colour that isn’t orange.

I’m on a beautiful small island in the middle of an equally beautiful lake. All around is a dream-scape of scenery that would have artists whipping out their easels in a painting frenzy.

Everything about the scenery is exquisite, from the glass-like surface of the lake to the perfect tiny islands (home to mysterious rich people) and the backdrop of mountainous ridges with iced cake toppings.

I ignore it all in favour of a row of trees.

They’re not particularly exceptional looking, but they are unusual.

The trees aren’t on the land. They’re in the lake. 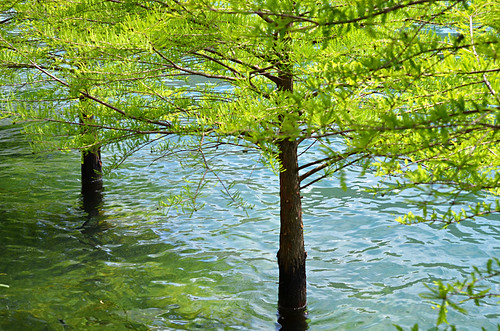 A board informs me they’re bald cypress, brought to Europe from the USA in the 17th century and that they can live for 1000 years.

The board also tells me that they ‘breathe’ through external roots that lead from the base of the trunk to the surface of the water. I suppose like a snorkel.

The thing is, these trees don’t seem to have snorkel roots. I scan the surface of the water but there are no woody tubes gasping for breath.

Maybe these ones have evolved, maybe they have gills.